How popular is nudism in the world today?

Very popular... and growing much more popular among women each and every day. Lets face it... women are the beautiful and attractive part of our human species... and men love looking at us. Women really do enjoy showing off their bodies... and why shouldn't we... it is very normal and natural... and it feels good... that is just how it is and how it has always been..! In my country all of the beaches are clothing optional and have been for hundreds and hundreds of years. Today the nations of Australia, Austria, Bulgaria, Denmark, France, Germany, Italy, Jamaica, The Netherlands, New Zealand, Norway, Poland, Portugal, Rumania, Spain, Sweden, Switzerland, Scotland, the USSR, Yugoslavia, and many, many others have officially designated clothing optional beaches. Countries that do not have officially designated clothing optional areas due to a high level of body shame are Mexico, China, and nearly all of the Muslim countries such as Afghanistan, Iran, Iraq, Pakistan along with many others... and believe this or not... the United States of America... the land of the free..! 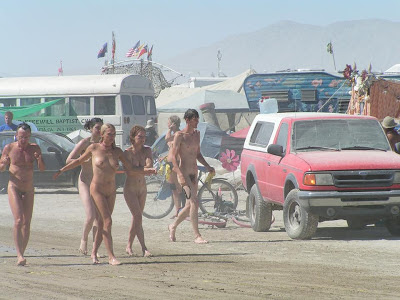 Poll after poll shows a very positive acceptance of nudism and naturism here in the United States as well as around the world. Being naked is actually fast becoming the thing to do everywhere... from snow skiing to walking the beach. The truth is... it is simply fun and it really is quite normal and natural..! But... even though the public clearly accepts and wants nudism... our government continues to reflect a view more in line with the Victorian Church of England. Although there are a number of clothing optional beaches and other places in the United States today... none have official designation and under Federal Law you are always subject to arrest for indecent exposure..!

Before the Judeo-Christian-Moslem concept of body shame... most of the tropical and temperate world was one big nudist camp. Greeks and Romans wore clothing when necessary or for certain social functions... but bathing and sports were openly enjoyed while naked. As exhibited by their sculpture and ceramics... the Greeks revered youth and physical fitness. To them the body was truly a work of divinity to be admired in its entirety. The Olympics were an offering of the best young athletes... unencumbered by restrictive and concealing clothes. Gymnos... or naked... was how the athlete trained and competed.

But... all things must pass. With the crumbling of the ancient civilizations and the emergence of a new religion which stressed the sinfulness of sensuality... Europe entered the dark ages of body shame..!

One such group of Christians were the Puritans... the 16th century Protestants opposed to the religious intolerance of the Church of England. In their exile to New England they became the anti-pleasure... moralizing... Paulists we associate with Puritanism.

The Puritans were so fearful of exciting lust that they disdained bathing because it promoted nudity. Many American Protestants who decry public nudity... conveniently ignore the fact that Jesus was naked at his baptism.

Back in Europe... the Renaissance had reawakened the body-acceptance and art of the ancients. Humanism and the celebration of the body were back... and even the reluctant Church had to accept the idea that God created man in his own image... and thought the work looked good.

As Europe progressed through the Renaissance... America remained entrenched in a mindset of religiously dictated morality that would define its mainstream culture for centuries. There were progressive thinkers... such as Benjamin Franklin and Henry David Thoreau... who saw health benefit in their daily naked walks... or "air baths"... but they were the minority.

By the turn of the 20th century... mainland Europe was far more tolerant of sensuality and body acceptance than the United States. Works of art and literature that were acceptable there were routinely banned in the United States... such as the oil painting "September Morn" by French artist Paul Chabas. This innocent nude bather was deemed obscene by Anthony Comstock of the New York Society for the Suppression of Vice.

While the United States was banning pictures of naked bathers... the first nudists were stripping themselves of the Victorian era prudery and bathing naked in Freilichtpark (free light park) in Lubeck, Germany (1903 - 1981). Nacktkultur... the German nudism... stressed naked healthful living... which included daily bathing and women could socialize together nude without being lewd... the concept of nudism got national exposure..!

In 1933... the International Nudist Conference was formed... which would later become the American Sunbathing Association... and by the mid 1930s there were eighty-one nudist resorts across America. Most nudist resorts... to some degree... still followed the philosophy of nudism as part of a healthy regimen... and organized nudism was selective of who could be members of the "landed clubs."

Organized Nudism... the American Sunbathing Association... and landed clubs became the establishment. The rebellious youth of the 1960s weren't about to go behind the walls of a nudist cloister. A new free light and free love culture... based on an honest body acceptance... asked why we didn't do it in the road. Acceptance of the nude body was only natural... and young people across Europe and America experienced the freedom of being nude at the beach... in the stream or wilderness... or on their back porch or sundeck. Often called "The Free Beach Movement" in the seventies... it was a philosophy of open nudism that would be called naturism.

Because they escaped our history of overbearing religious prudery... mainland Europeans have enjoyed more personal freedoms than Americans. For years most European tourist beaches have allowed top free bathing for women. Nude beaches are now common and popular throughout the continent... including Eastern Europe and in Bulgaria where I come from.

Modern nudism began in Germany and France. France now has a nudist resort city... Cap d'Agde... on the Mediterranean. Since the early seventies... Denmark and the Netherlands have become quite accepting of nudity in general... and there have been nudist activities on city streets and parks of both countries. All but two of Denmark's beaches are clothing optional.

In 1980... TNS... The Naturist Society... was formed in the United States to provide information and support for the free beach and other naturist groups around the country. The Naturist Action Committee monitors and assists in the ongoing nationwide struggle to keep clothing optional beaches and recreational areas from being closed by the narrow-minded fanatics who still echo Comstock's 19th century prudery.

National opinion polls in 1983 and 1990 revealed that 72% of Americans approve of designated clothing optional beaches. To date... over 30 million Americans have experienced mixed social nudity. With the growing number of naturists here... and tourists from Europe... many States have established clothing optional beach's... and with any luck we will have many more in the future..!
You must log in or register to reply here.
Share: Facebook Twitter Google+ Reddit Pinterest Tumblr WhatsApp Email Link