Some resorts are "clothing optional" and some aren't. At a clothing optional resort, you're free to remain dressed with no pressure to disrobe. Ask about their policy, as "CO" is not a bad choice if the spouse isn't so sure about undressing. One almost universal exception is that you will probably be required to be nude in their pools and hot tubs. The rather weak argument is that it keeps fibers from clogging the filters. The real reason is that "skinny-dipping" is almost a sacred right to nudists, and that's why you're there, isn't it? Even if the club is "CO", take the plunge and disrobe. You'll probably feel more out of place if you stay clothed, since the majority will likely be nude. 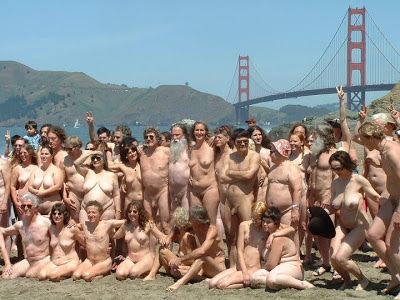 Most clubs are not "clothing optional" and expect visitors and members to be nude, weather permitting. It's also easier to get used to nudity when everybody's nude. First timer's are usually given some latitude, but the sooner you disrobe, the sooner you'll feel less out of place. After the call, the drive, and the guy at the gate, taking off your clothes is the easy part. As in the beach discussion above, my advice is to "just do it". It feels pretty strange the first time, stripping beside your car in a parking lot. The feeling of vulnerability fades over the next few hours. Just ignore it and it will pass. Don't forget to bring a towel to sit on (universal practice). And don't be so nervous that you lock your keys in the car!

There is usually plenty to do, if you're so inclined. The stereotypical nude volleyball game is actually a favorite pastime at most clubs. It is a wonderful distraction and a great way to get used to being nude. Join in if offered. Tennis anyone? Most clubs have pools, saunas, and/or hot tubs which facilitate social interaction, and nature trails or quiet sunning areas for those times you just want to be left alone.
You must log in or register to reply here.
Share: Facebook Twitter Google+ Reddit Pinterest Tumblr WhatsApp Email Link