Anyone who has been involved in naturism for any time at all quickly learns the fact that far fewer women than men seem to enjoy participation in social nudism. At clothing optional beaches for example there are generally several times as many men as women. The same is true of online nudist and naturist discussion groups. Only in private clubs and resorts, where deliberate quotas are enforced does anything approaching parity between the sexes occur.

The focus today is on the barriers to female participation in social nudity. In a future article I will explore some of the reasons why men seem to be more attracted to social nudity and seem more willing to adopt the naturist lifestyle.

Just why do so many more men than women seem to enjoy social nudity? Are women just less likely to find the experience of nudity, either privately or socially enjoyable than men? Or is there another explanation for the persistent gender imbalance commonly found in social nudity circles?

Significant deterrents do exist for women when it comes to social nudity that men do not have to deal with and I feel this is why fewer women are involved. These include greater problems with body image, concerns about voyeurism and sexual harassment, worries about physical safety, and simply the conditioned cultural disapproval of nudity in general - the general attitude has been that nudity is offensive, disgusting, lewd, shameful and immoral. The weight of social tradition is much more likely to be an issue for women than men.

Even for women who manage to overcome these obstacles, and are able to feel relatively at ease with being naked in public and who have come to discover that they enjoy it, there remains one other significant problem. Since many more men than women choose to participate in social nudity, some women nudists may feel simply feel intimidated and inhibited simply because there are fewer of them, in other words by the sheer imbalance of numbers among the sexes. The gender imbalance may not even be an obstacle to female participation necessarily because of concerns about rude behavior or physical safety. It can simply be that women like to spend time socializing with other women at about any kind of social gathering, whether naked or clothed. Thus, the absence of other women in significant numbers, to talk with and socialize with can be a real deterrent to many women having the desire to participate in social nudity. 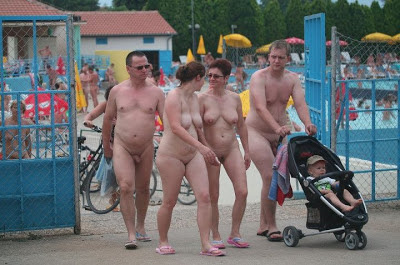 Clearly, a woman who is able to get past all the obstacles and learns to feel at ease with and enjoy being nude in a social setting deserves great admiration. I feel it takes a great deal of courage for a woman to get past all the barriers to the enjoyment of social nudity that can be identified. She must also he bold enough to overcome complex social and cultural conditioning embedded since childhood that equates nudity with sexuality and creates unhealthy attitudes about human bodies. She must be willing to shed the negative body image perceptions she may have, imposed by mass media constantly bombarding women with perfect images of an air-brushed, cosmetic beauty standard which only a tiny percentage could hope to approach much less retain for very long.

Women also have to consider the consequences of family, friends, or employer finding out about her participation in social nudity. Even if she knows better, others in our repressed society may label her as a hedonist or at minimum, a compulsive exhibitionist. She may have concerns about how her participation in social nudity will affect her relationship with a significant other. If she is a mother, the issues of social nudity multiply and magnify. What about her children’s safety and welfare? Is it harmful for the young to see adults nude? What about the possible negative judgments of her fitness as a parent by ignorant family and friends who might find out?

It really seems a wonder that women even consider, much less risk, social nudity despite all the touted benefits of clothes free living. What a leap of faith it must take for a woman to overcome her litany of anxieties in order to be nude and vulnerable among strangers for the first time. It is a shame that women face so many determents to participation in social nudity. A naturist experience has the power to make special contributions to women because it is so very different from the anti-female culture that teaches them to reject their bodies and can help them to appropriate the truth that each person’s body is a uniquely beautiful, original creation and an incomparable work of natural art. Women can learn that social nudity actually defuses sexual tension and feels so freeing and relaxing. Because it is such a humanizing experience, being nude with people also facilitates communications across gender and generational gaps, making us feel a part of some great universal family.

In subsequent posts, I will discuss individually and in more detail, the obstacles and barriers to female participation in social nudity and will attempt to offer solutions which might help a female curious about naturism but daunted by the deterrents to feel more inclined to try nudity and experience it in a social setting. It is human nature to fear the unknown and sometimes the obstacles and barriers are much larger and more intimidating in the mind than they actually turn out to be in reality.
You must log in or register to reply here.
Share: Facebook Twitter Google+ Reddit Pinterest Tumblr WhatsApp Email Link